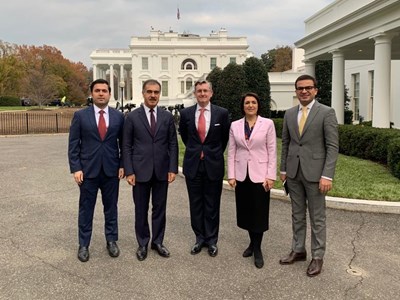 Washington, DC, USA (us.gov.krd) – The Head of the Kurdistan Regional Government Department of Foreign Relations, Minister Safeen Dizayee, rounded out a productive week in Washington with meetings with senior US officials at the White House and the departments of State, Energy, and Defense.

This was the Minister’s first visit to Washington as Head of the Department of Foreign Relations. The purpose of his trip was to outline the new KRG Cabinet’s agenda and to share views on key areas of mutual interest in Kurdistan, Iraq, and the wider Middle East.

Minister Dizayee, accompanied by KRG Representative to the United States Bayan Sami Abdul Rahman, visited the White House on Friday to meet Vice President Mike Pence’s team to discuss a range of pressing political, security, economic, and humanitarian issues. They met with Special Advisor to the Vice President for the Middle East Ludovic Hood, and Deputy Assistants to the President Stephen Pinkos and Sarah Makin. The Minister thanked the White House and the American people for their continued support to the Kurdistan Region in general and the Peshmerga in particular.

It was their second visit to the White House this week; earlier in the week they met Rob Greenway (pictured), the Special Assistant to President Donald Trump and Senior Director for Middle East and North Africa Affairs, as well as staff of the National Security Council. The two sides discussed practical steps to closer cooperation and partnership.

The delegation also met with Iraqi Ambassador Fareed Yasseen at the Iraqi Embassy in Washington.

At a lunch meeting with the Kurdish American Congressional Caucus, Minister Dizayee briefed Representatives Ralph Abraham, who co-chairs the Caucus, David Price, Ruben Gallego, Brad Sherman, Michael Cloud, and Andy Kim on a diversity of topics related to stability in Kurdistan and Iraq.  He thanked them for their staunch support over the years.

Minister Dizayee and Representative Abdul Rahman also met separately in Congress with Senators Dianne Feinstein, Chris Van Hollen, Tammy Baldwin, Jack Reed, and Susan Collins, as well as Representatives John Moolenaar, Mike McCaul, Mike Gallagher, Jim Langevin, Liz Cheney, and Ralph Abraham. In each meeting, Minister Dizayee thanked members of Congress for their support to the people of Kurdistan and the Peshmerga, and outlined the need for sustained US engagement with Kurdistan and Iraq.

Focusing on international development and finance issues, Minister Dizayee and Representative Abdul Rahman met separately with Dr. Merza Hasan, the World Bank’s Executive Director and Dean of the Board of Executive Directors, and Gavin Gray, Mission Chief for Iraq at the International Monetary Fund.

Minister Dizayee spoke on Wednesday at The Washington Institute for Near East Policy. During the wide-ranging public discussion with scholar Dr. Bilal Wahab, he covered the KRG’s view of the protests in the south of Iraq and the importance of the US-KRG partnership for peace and prosperity in the region. A livestream of the event is available here: http://bit.ly/37nVtzn

On Thursday, the KRG Representation in Washington hosted a reception in honor of Minister Dizayee, which was attended by nearly 200 guests, including members of the US government, think tank experts, journalists, investors, and members of the Kurdistani community. In his remarks, Minister Dizayee thanked the Washington community for their support for Kurdistan. Representative Abdul Rahman, Principal Deputy Assistant Secretary of State for the Near East Joey Hood, and Iraqi Ambassador Fareed Yasseen all delivered remarks as well.

Prior to arriving in Washington, Minister Dizayee met with Kurdistani community members in Michigan and Virginia. 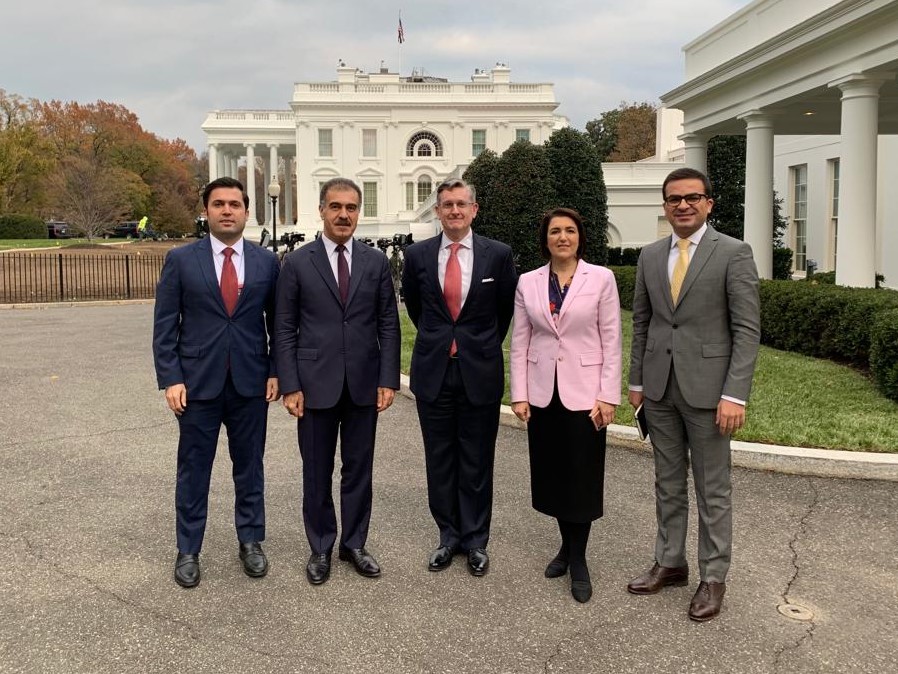